The history of sports in India is very ancient and dates back to the Vedic era. It is more likely that many of today’s Olympic disciplines are advanced versions of games of strength and speed that flourished in ancient India. Chess, wrestling, polo, archery and hockey (possibly a fall-out from polo) are some of the games believed to have originated in India.

Kabaddi: It is one of the most popular sports in India played by the people in villages as well as in small towns. Kabaddi is an Indian game which requires both power and skill for its play.

The origin of Kabaddi can be traced to pre-historic times when man learned how to defend in groups against animals or attack weaker animals individually or in groups for survival and food. 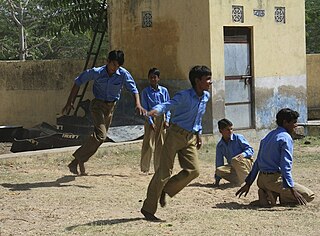 Kho-Kho: Kho-Kho is one of the most popular traditional sports in India. Kho Kho is a ‘run and touch’ game that is very simple to play and can be enjoyed by people of all ages.

Kho-Kho in India goes back a long way, as it was first started in the state of Maharashtra.

One of the main points of a successful animal life is “Active Chase” which is a fundamental principle of the Indian game called Kho Kho, synonymous with the phrase “Game of Chase”. It will not be a mistake to say that Kho Kho was a recognized sport in the ancient times even earlier to the oldest mythological writings of classics- Mahabharata.

Mallakhamb: Mallakhamb is an ancient traditional Indian sport. ‘Malla’ means gymnast, and ‘khamb’ means pole. Thus, the name ‘Mallakhamb’ stands for ‘a gymnast’s pole’. Mallakhamb was used used by wrestlers for practicing their skills in the game KUSTI. But now a days the trend has changed and it has got a special identity.

The origin of this ancient Indian sport can be traced to earlier part of the 12th century. A mention of wrestlers exercising on wooden poles is found in the Manasholas, written by Chalukya in 1153 A.D.

Ball badminton: Ball badminton is an indigenous sport of India. It is a racquet game played with a woolen ball upon a court of fixed dimensions. Ball badminton is a fast-paced game; it demands skill, quick reflexes, good judgment, agility, and the ability to control the ball with one’s wrist.

Previously, ball badminton was an attractive game for rural boys since it required a minimum of equipment. The game drew a large number of students from South India, resulting in the formation of the Ball Badminton Federation of India in 1954. This game was played as early as 1856 by the royal family in Tanjore, capital of Thanjavur district in Tamil Nadu.

Gilli-Danda: Gilli-Danda is an amateur sport played in the rural areas and small towns all over India and Pakistan as well as Cambodia and Italy. This sport is generally played in the rural and small towns of the Indian subcontinent. It is widely played in Punjab and rural areas of the North-West Frontier Province and Sindh (Pakistan) and Sultanpur district, Uttar Pradesh (north India).

The game’s origins in India date back to at least the Maurya Dynasty.

Vallamkali: The snake boat race, known as Vallamkali in Kerala. It is an interesting traditional game held on the occasion of Onam. It is a famous water sport and one of the main attraction held in Kerala. Boat Race is truly a feast to the eyes of the visitors, who come from far off places to see it.

The Vallamkali was first originated in Assyria, on a New Year day in BC.300. The history also reveals that, the Vallamkali (Boat Race) also took place in some other countries like The Andaman and Nicobar Islands, Combodia, Bangkok, Burma, Britain etc. In the 14th century, there was a war occurred between Kayamkulam and Chembakasseri. During that time the king Chembakasseri Devanarayana had decided to build a suitable war boat and he gave the responsibility to the famous “Thachan” (Carpenter) in that period.

Jallikattu: Jallikattu is one of the oldest living ancient sports seen in the modern era. The ancient sport of Jallikattu pits crowds of brave young men against angry bulls. It is similar to the Spanish running of the bulls but a traditional part of Pongal celebrations in Tamil Nadu.

Kambala – the Buffalo race: When the fields are fush with water there is one sight not to be missed, the kambala or the buffalo race that is unique to Dakshina Kannada. This is a unique sport of this region. Historians date the roots of this race back to more than a thousand years. At that time Kambala was the event when farmers paid tribute to their gods for protecting their crops.

Camel Race: Camel racing in Pushkar is one of the major attractions for tourist in Rajasthan. Camels are very important part of desert life, These camels are decorated beautifully at the time of race.

Archery: Archery is one of the most ancient sports originated in India. This is the favorite pastime or sports of the people of Manipur, It’s an everyday activity of the state dwellers. During every festival archery matches are held.